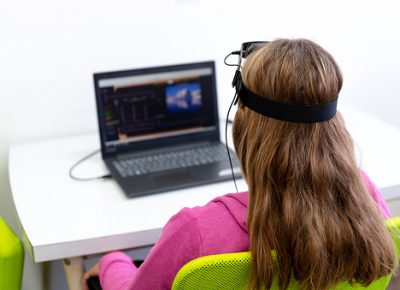 The therapeutic application of neurofeedback for ADHD has been implemented since the 1970s. Research has shown that neurofeedback can be a potentially effective therapy for ADHD, and the results were promising. Several different neurofeedback protocols have been observed.

High theta/beta ratio(>3) has been considered to be strongly associated with ADHD. Theta/beta ratio (TBR) neurofeedback strives to decrease theta and/or increase beta power in central and frontal locations, regions that are associated with executive functions and attention. A 2012 study[4] compared 3 groups of ADHD children, one group took methylphenidate, a stimulant and the current first-line medication for ADHD, the second had TBR neurofeedback, and the third group had a mix of both. The study found all 3 groups showed similar improvement of attention and hyperactivity, meaning that neurofeedback can be as effective as methylphenidate.

Sensorimotor rhythm(SMR) training is another protocol used for ADHD. In 1976 Lubar described that children with ADHD symptoms shown improvement after SMR neurofeedback over the sensorimotor strip (predominantly in the central right-hemispheric region) [2]. Lubar’s seminal studies also revealed that the beneficial hyperactivity-reducing effects of a combined SMR/theta neurofeedback training were maintained after psychostimulants were withdrawn in hyperactive children.

Further research is warranted for the effectiveness of neurofeedback protocols. Based on some past research, neurofeedback therapy is potentially effective management for ADHD, and with hope, it can serve as an alternative method for treating ADHD in the future. Many other neurofeedback protocols may be effective as well. Currently, there is no standard protocol for ADHD, and each individual is evaluated on a case-by-case basis and receive therapy accordingly. Quantitative electroencephalography(QEEG) is a brain evaluation method that shows brain activity across different frequency bands and can be used as guidance to develop treatment protocols. https://www.colombia.co/

Posted in Our Blog |